Writer, What Size is This Horse?

Knowing how to talk about the size of a horse might seem like a mundane topic but a writer should know certain trigger words because their incorrect use is a dead giveaway to horse lovers. 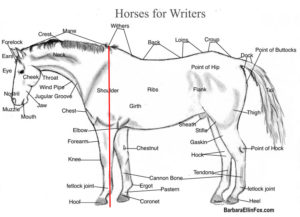 Horses are measured from the withers to the ground by hands. The red line in my parts of the horse chart depicts this line. A hand is a unit of four inches that stems from when men measured horses according to the width of a man’s hand, rather than a measuring tape. Today, a “stick” that has a level is used for official measurement.

When is Height Important?

The height of a horse is more important to horsemen in modern times than it was in the 19th century. Certain horse show competitions are divided according to the size of a horse or pony which lends to creative ways to make a tall horse shorter, including teaching the horse to sink down as the stick is applied. There have been times in history when unscrupulous horse dealers sawed a half inch off their measuring sticks, making their horse seem taller to get a higher price. There are innumerable opportunities for the less than stellar character in the horse world.

The cavalry’s ideal size for a riding horse was fifteen and half hands tall. They considered this size the most durable and athletic. Even the early U.S. Olympic Team riders believed a fifteen and a half hand horse was generally more coordinated.

Here is where the unaware person can be tripped. When a horse measures 64 inches at the withers, he is not called fifteen four. It is not written 15.4 hh. The four inches are rolled over into the next hand and the height becomes 16.0 hh. And the same progression goes here. The horse is 16.0, 16.1, 16.2, 16.3 and then rolls over to 17.0 hh. We never refer to a horse as sixteen four or five hands high.

How Else is Size Important?

Size helps to describe the picture you are writing. A three-year-old child riding an eighteen hand draft horse is certainly a different picture than a six foot man riding a twelve hand pony. The child’s legs might barely span the horse’s back, while the man might need to lift his feet to keep them from dragging on the ground.

When carriage horses were part of life it was necessary to match pairs according to size in order for them to work well together. A small horse matched with a large one in harness had to work harder to keep up with the bigger horse’s efforts and stride.

If you are a farmer who has lost his sixteen hand draft horse, you would search for a horse the same size in order not to have to buy new equipment for a smaller or larger animal.

In general, horses have gotten larger in modern times due to better health care and feed, and through selective breeding. The modern horseman believes bigger is better. But with the increase in size comes diminished coordination or handiness. And in general, larger horses have more difficulty with their hooves than smaller horses.

Historical writers should be aware which breeds of horses were small in their time period. 14.2 was an average size for a quarter horse in the early days of their development, but I have ridden modern quarter horses who were over seventeen hands. An Arabian in the early twentieth century was considered substantial at 14.2 hh, but my own Arabian was 16.0. Today a 14.2 hh horse of either breed is considered small. Historical authors need to be more aware of the size of the horses in their stories than do contemporary writers.

Why Not Use Feet & Inches?

Tradition says horse height is only considered in feet and inches when you compare it to a person’s height. The rest of the time use hands, or description such as, small, medium or large.  Or try comparison. The horse’s withers reached to a man’s shoulder or were taller than the woman. Or he could rest his arm across the horse’s back.

Ponies are determined several ways. A pony can be a breed with a registry such as Shetland, Welsh, or Connemara. Ponies are also categorized by height instead of their breed. For instance a short Arabian, quarter horse, or a horse with an unknown parentage can be considered a pony if it measures 14.2 hh or less at the withers. Certain competitions categorize ponies by inches.

So there you have it. Everything you could ever want to know about horse height!  I hope this helps you with height descriptions.